Welcome to the English page of my personal website. My name is Marco Vallarino, I was born in 1977 in Imperia, where I live. I work as a journalist at the newspaper Il Secolo XIX. I’m also an expert of gamification, storytelling and web marketing.

I’ve written novels and short stories and I’ve published many books, but my real passion has always been Interactive Fiction. Since I was a kid, I’ve played tons of text adventures, in Italian and in English, and I’ve also tried writing some games, using first Qbasic and later on Inform 6.

My works Darkiss 1, Ayon, Enigma have been published on the cover CDs and DVDs of many Italian computer magazines, such as Win Magazine, Computer Bild, Giochi per il Mio Computer, Linux Pro, Idea Web. They’ve also had a good ‘success’ on the web, with over 50.000 downloads and a lot of enthusiastic feedback from Italian players.

In 2014 I released the comedy Save the Cheshire Cat! that was my first attempt to translate a game of mine from Italian to English, with a little help from my friend Emilio Audissino.

Save the Cheshire Cat! is a mini text adventure about a missing cat; it’s very simple and short, but I hope it’s also funny. You’re at a book fair that takes place in the old town center and your aim is to find the missing feline before it’s turned into a fur coat. You can download the game here.

Darkiss! Wrath of the Vampire

In 2015 I released the horror Darkiss! Wrath of the Vampire – Chapter 1: The Awakening (Darkiss 1 for short) which you can download here for free. It is the English version of Darkiss! Il bacio del vampiro – Capitolo 1: il risveglio. The main character of the story is the evil vampire Martin Voigt, who was slain and supposedly made harmless for good… supposedly! Now he comes back to life to retaliate on those who tried to get rid of him. But first he has to escape from his own tomb, where he is imprisoned by the traps set by his enemies.

Darkiss 1 got a good 12th place, out of 55 entries, into the 2015 Interactive Fiction Competition with some good reviews from Wade Clarke, Emily Short, Lucian Smith, Molly G. So, in 2016, I also translated into English other two games of mine: Darkiss 2 and Zigamus, the one I wrote for Vigamus, the video game museum of Rome.

Darkiss 2, which got a not-so-bad 17th place into the 2016 IF Comp, is subtitled Journey to Hell. This time the vampire Martin Voigt moves into the hellish realm of Ovranilla, a wasteland full of dangers and populated by wicked monsters. He has to meet the three priestesses of Valmar: Carmilla, Mircalla, Millarca, in order to obtain their help for his war against mankind.

In 2020 I published a novelization of Darkiss 1 on Wattpad.

Zigamus, subtitled Zombies at Vigamus, is a divertissment set into the museum, which has been attacked by zombies. To save it from the monsters, you can only count on your brain and the relics and gadgets exhibited in the building.

More text adventures to translate from Italian to English

I still have to translate into English some games of mine. As I’m looking for help to do that, if you’re willing to correct my translations and playtest the games, please, write me an email.

Here is the list of the games that, for now, are available only in Italian:

All my games are free and cross-platform. You can play them on Windows, GNU/Linux, Mac, iOS, Android, Amiga and many other systems by using a free interpreter, such as Gargoyle, Frotz or Text Fiction.

As an expert of gamification who uses to apply style and technique of the videogames to promotional and didactic works, I’ve developed many projects. Last spring, I worked with the students of the high-school “G. Marconi” of Imperia to make an educational text adventure that promotes structures and lessons of the institute.

You play the role of a kid who has to choose which high-school to enroll. You may visit the edifice and take aptitude tests to know which subjects you prefer among information technology, electronics, mechanical engineering, hydraulics. You have to repair a radiator, change the oil in a car, translate a text from English to Italian, make a printed circuit board, program a chip, build a little robot. There is also a final secret test. The game is illustrated by the photos of the school rooms and equipment.

In 2017 a research group from UC Berkeley interviewed me as a gamification expert. David Helldén asked me about my projects, business models and the future of game design. You can read the interview here: Gamification and storytelling from Italy to UC Berkeley.

Love at the time of graffiti draws hearts on the walls and makes them beat fast!

«Looking at graffiti on the city walls, how many times have we wondered who might have done it, when and why? The book Il cuore sul muro [The Heart on the Wall] by Marco Vallarino, a young Italian writer and journalist at the newspaper Il Secolo XIX, gives an answer to these questions with a Bildungsroman story set in the milieu of Italian high school, street art and night-life.»

About my books, I think my most important work is the novel Il cuore sul muro (The Heart on the Wall), published in Italy in 2018 by the Rome-based All Around Edizioni. It is a dark love story which has some elements of the mystery novel and offers plenty of dramatic twists and much suspense. It is also a docu-fiction that explores the facts of and reasons for the graffiti war which took place in the Italian Riviera in 2003, when gangs of youngsters covered the city walls with myriads of graffiti. (Later, these young creative talents called “vandals that soil the city” came out of the original illegality to become respected personalities of the contemporary art world.)

The protagonists of the story are Gianni and Elena, two high-school students. One morning, while they are waiting for the school bus, they find a writing on the wall that is the first part of a mysterious story “published” as graffiti scattered around the city. To see how the story ends, they play hooky from school, travelling frantically from one street to another to read the subsequent parts of the story.

But, while Elena considers it just a funny way to dodge a difficult oral exam, Gianni falls in love with those graffiti, which tell the last crazy moments of the life of a boy who is dying in a disco for a drug overdose. So Gianni decides to find out the author of that (anonymous) story and to learn more about the boy and his death. But he has no friends among the graffiti writers, who are suspicious and rough with people they don’t know.

Only the heart can show you the way to follow

Lost in a situation in which nothing is as it looks like, Gianni gets involved in a bittersweet and complicated love story, where only the heart will be able to show him the way to follow. The encounter with Silvia, a beautiful but anguished university student of philosophy, will lead him to live an unusual and intense experience. This will eventually be an occasion for his personal growth and it will also be his first, great love.

Besides the plot concerning the graffiti and love and death, the book is also an instrument of social survey that talks about the young of the Ligurian Riviera standing by their side, without criticizing them or offering hasty judgments. Among its topics, there are the controversial relationship of the young with their families, the troubles at school, the drama of drug addiction, that sometimes has catastrophic consequences.

In Italy Il cuore sul muro has received very good reviews and has been adopted by many high-schools as an educational reading.

I’m looking for foreign publishers that might be interested to translate and publish the novel in their countries. If you want to have more information about that, just write me. The Italian text is available for reading.

My email address is ovranilla @ gmail.com and I’m on Skype as gyrev2007. I am also on Facebook and Twitter as marcovallarino.

A REVIEW OF MY BOOK

You can also read this review of the book, written by the important book critic Antonella Viale. It’s from the number 23 of Italian cultural magazine Blue Liguria:

A classy young adult novel for ages 15 up has just emerged from Marco Vallarino’s kaleidoscope-like imagination. Vallarino is the young fashion journalist from western Liguria, who is already known for having published something like a hundred stories with important newspapers and publishers.

The name of the book is The Heart on the Wall, Il cuore sul muro (All Around, 160 pages, 13 euros), and it immerges the reader in an absorbing story that touches on every theme, encouraging both the young and the old to learn more about them.

It all begins with some graffiti at a bus stop, where the main character, Gianni, is waiting for the bus to go to school: episode one in a story about a drug addict who is about to die of an overdose. The boy then follows the chapters across the whole of the city – a vehicle for describing Imperia – while the reader becomes ever more involved in the “uneasy fascination” of the words.

The hero searches for the author of the writing, tries to get him out of trouble, trying to deflect them… in a classic search, like that of the Holy Grail, like that of Harry Potter, with all the coups de scene necessary, and with love at first in the background and then as the motivating force.

In 2020 I made a videoclip about street art and graffiti writing in Imperia. You can watch it on YouTube.

I hope you enjoyed my English page, write me if you want know more about my works. 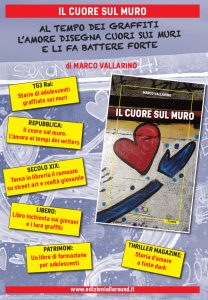